First experience with a Box Blade

Today I had the chance to attach a 5 foot box blade to Johnny (our John Deere 1025R).

There is a crushed stone parking lot behind our church which needed some work. Since I’ve been considering purchasing a box blade for Johnny due to the various projects we’ve been encountering, one of the church members suggest I try out the church’s to evaluate whether I could use it.

This particular blade is a Land Pride BB1560.  It has 4 scarifiers.  According to the Land Pride specifications, it weighs 428 pounds. I don’t know that any of my observations would be specific to this particular box blade. Rather, I believe they would apply generally to any brand of blade.

When facing a driveway or parking lot with potholes, one might first think that simply filling the potholes with rock would be the best solution. However, this doesn’t work very well in practice. Typically cars will quickly push the rock right back out, re-opening the pothole again.
Instead, the driveway or parking lot needs to be ‘dug up’ somewhat with the dust/dirt/rock becoming all mixed together, and the potholes being destroyed by this digging.

After the area has been dug-up, then one begins the process of leveling out the mixture of dirt/rock.

It is all about weight

I found that I could not get the scarifiers to dig in to the hard-packed parking lot without additional weight.  Even though 428 pounds seems like a lot, it was not enough to penetrate the packed rocks.
I added 8 of my 42lb Deere suitcase weights.  This really helped.  However, even weighing approximately 800 lbs was still hardly enough to penetrate.

The initial trip over the packed rocks rarely had much impact.  The scarifiers would penetrate only 1/2 inch or so.  However, by the 3rd trip over, I was getting sufficient penetration for the blade to begin to dig in.  Once the blade began to pull downward, I was usually able to break through the hardest packed rock.

How Deep to run the scarifiers during initial digging phase??

I’m not sure I figured out the optimal depth for the scarifiers. I know that they needed to be below the cutting edge of the blade. For awhile, I had them several inches below the blade, thinking that I wanted to cut deep, so the scarifiers should be deep.
Then, later, as I mentioned above, I noticed that when the blade began to dig-in and the box began to fill up, the scarifiers would penetrate more effectively.
So, in this particular situation, having the scarifiers about 1 inch below the blade cutting height seemed to work best.

Would LESS scarifiers be better?

When shopping for a box blade, I had noticed that different blades of the same size might have a different number of scarifiers.  I’ve seen from 3 to 5 on the 4-5′ blades.  For some reason I had assumed that more scarifiers would be better.  More is always better, right?  After using this blade today, having difficulty getting it to dig in, I’m not as convinced that more is better.  If I had concentrated that 800 lbs of downforce on less scarifiers, perhaps they would have been forced to dig in.

I found that it was difficult to do finish work with the blade on the 1025R. I believe this can be attributed to some basic ‘weaknesses’ of this size tractor.

So, when it got to the detailed finish, I would recommend using the loader to ‘back-drag’.  This works beautifully.

What is the best size blade for the 1025R

I’ve heard folks debate between the 4 ft and 5 ft sized box blades for the 1-series. I found that I could not pull a box full of rock while the scarifiers were digging with this 5 ft blade. I could not get sufficient traction even with the loader, wheel weights, filled tires, and all of my cheeseburger-enhanced ballast.

Having said that, I really like having a few inches beyond the size of the rear tires. With the wheel weights, 48 inches does not quite extend beyond the edge of the tires.
So, if I get serious about buying a box-blade, I believe I will look at a 54″ width. Not all companies make them, so I may be forced to reconsider, but I have seen several.

As for other features , as mentioned above, I am not going to dismiss a blade with 3 scarifiers now.
Also, I would like to find a blade with a suitable place to hang my 42lb weights. I will certainly want them for additional down-force. 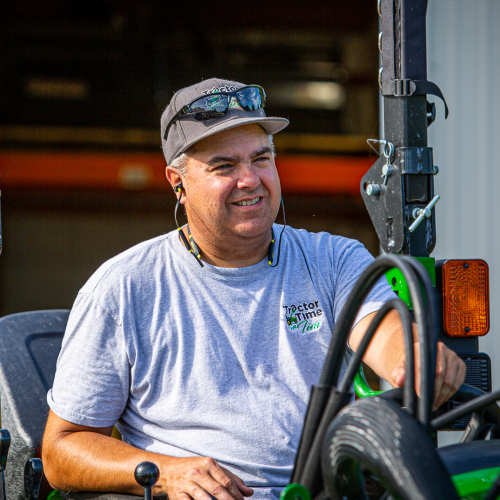